Caption Literature
A Kiribati or Gilbert Islands, Micronesia, Belt
Made of fibre threaded coconut shell discs ‘Katau’ With an old label reading ‘Belt of cocoa nut shell discs Miana Gilbert Islands Micronesia’
Late 19th Century
Size: approx 76cm long – 30 ins long (each strand)
Ornamental belts were a very important part of dance costume and attire in the Gilbert Islands. They were kept and stored by the family’s senior women and were worn in performance of the ceremonial ‘Ruoia’ dance. Men made the ‘Katau’ belts from drilled and shaped coconut shell and they were sometimes used as exchange valuables and tributes, and were thus regarded as a form of currency.
The coral atolls of Kiribati are poor in natural raw materials, but song and dance are two of their greatest art forms. In 1900 Robert Louis Stevenson wrote: ‘Of all dancing in the South Seas that which I saw at Butaritari stands easily the first, it leads on the mind; it thrills, rouses, subjugates; it is the essence of all art, an unexplored imminent significance’ (RLS in the South Seas). 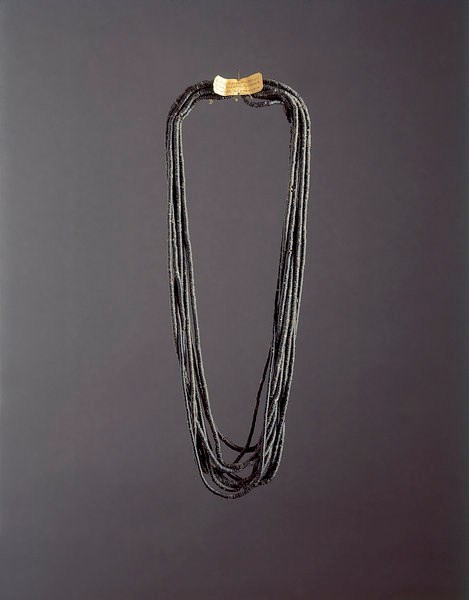