Caption Literature
A Rare and Superb Ancient Olmec Culture, Central American Green Jade Figure of a
Hunchbacked Dwarf
With stone drilled eye sockets and pierced ears. A stone drilled suspension hole to the neck perhaps for use as a chest pendant
Circa 500 BC – 200AD
Size: 10cm high, 5cm wide, 5.5cm deep – 4 ins high, 2 ins wide, 2¼ ins deep
The enigmatic Olmec’s created the first major civilization of the New World in around 1200 BC. They lived on the southern coast of Central America and spread their religious and artistic ideas over a large distance. The Olmec’s were the greatest sculptors of early America and the stylistic discipline, innovative figurative form and artistic quality of their stone sculptures is outstanding.
The Olmec sculptors created hundreds of exquisite ornaments and ritual amulets from a wide range of metamorphic stones without the use of metal tools. Jade, jadeite and basalt were their favourite materials all of which were carved with stone implements. The Olmec’s prized green and blue-green jadeite above all others.
Human figurines tend to be more stylized than naturalistic, some say with Jaguar like mouths and faces as they greatly venerated the Jaguar. Virtually all show complete figures with heads and bodies, although the bodies and limbs are less detailed than the heads. Standing males are the most common subjects and are bald with pear shaped heads showing the practice of skull deformation, a marker of elite birth. However, in addition to these traditional straight-legged flat-headed figures, the Olmec also produced more unusual figures of hunchbacks, deformed dwarves, and even ‘foetal’ figures, which are sometimes shown holding their hands to their ears as if straining to hear a distant sound. 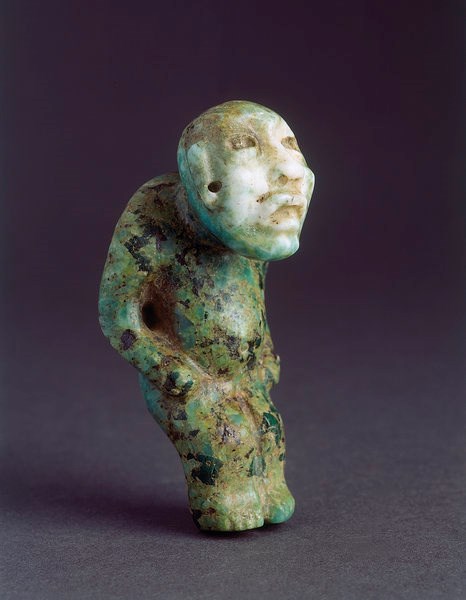