Caption Literature Exhibition
Three English Gothic Oak Ecclesiastical Pew ‘Poppy’ Heads
One poppy head carved with a pelican in her piety opposite instruments of the passion. The reverse (damaged) carved with a crouching dog and a rose within a pomegranate
Circa 1480 – 1520
The second pew end carved with a griffin or gryphon, a beast with the head and wings of an eagle and the body of a lion, the nose now lost. Legend tells that a griffin instinctively knows where gold can be found and that they make their nests of gold. They are the guardians of gold mines
Circa 1500
The third pew end, an early gothic poppy head, a trefoil of close knit foliage
Circa 1450
Size: 38cm high – 15 ins high (max.)
From 1400 to 1547 congregational seating was gradually introduced into the naves of many English parish churches, perhaps as a result of the new habit of preaching by the clergy. Much craftsmanship was bestowed on the seating of churches particularly bench ends although the quality of the decoration often mirrored the social standing and wealth of the occupants. The crowning feature of the pew was the ‘poppy’ or ‘poupée’ head carved to each end either in the form of a trefoil with close knit foliage or with animals and figures of allegorical significance. It was in the 15th century that the carpenter began to decisively assert himself and to evolve a style suited to the working of his material and his environment. It is from this period that the best examples of English parish church furniture can be found.
griffin and pelican poppy heads SOLD
trefoil poppy available 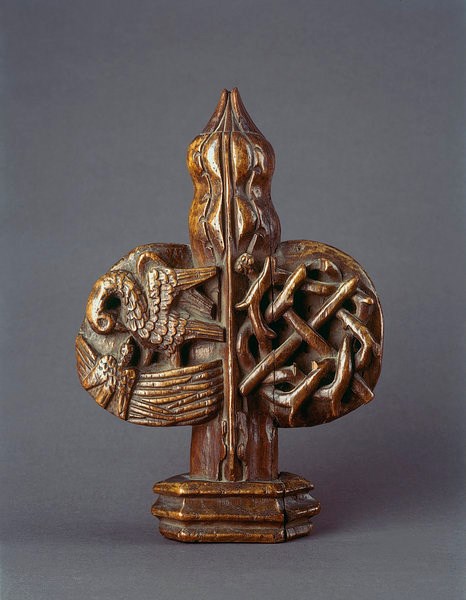 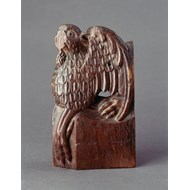 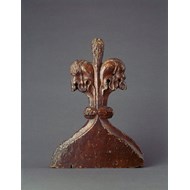