Caption Literature
A Carbon Print by the American Photographer Carl Moon (1879 – 1948)
Entitled ‘Hopi Snake Priest’ dated 1912 and with the publishers blind-stamp ‘Copyright Fred Harvey’
Circa 1912
Size: 24cm high, 19cm wide – 9½ ins high, 7½ ins wide
The Hopi, or Hopitu meaning peaceable people, live in a large arid region of North-eastern Arizona. In late summer they perform their best known ceremony ‘The Snake Dance’ which is a dramatised prayer for rain lasting 16 days. The priests would collect live rattle snakes for the ceremony and dance holding them in their hands, around their necks and even between their lips.
Carl Everton Moon became interested in the Native Americans and their art from an early age and with an aptitude for photography set up a studio in 1903 to take photographic studies of the South-western Pueblo Indians. By 1906 his photographs began appearing in magazines and his work was exhibited at the Smithsonian Institute, and then by the special invitation of President Roosevelt, a selection was shown in the White House. This national attention secured him a commission from the Fred Harvey company to create a collection of Indian photographs and in 1911 he moved to the Grand Canyon, built a studio and for 7 years documented the Indian peoples of the area both in studio portraits and in their natural context. A collection of these images was purchased by the Natural History Museum of the Smithsonian in 1910. This carbon print is one from the same series. 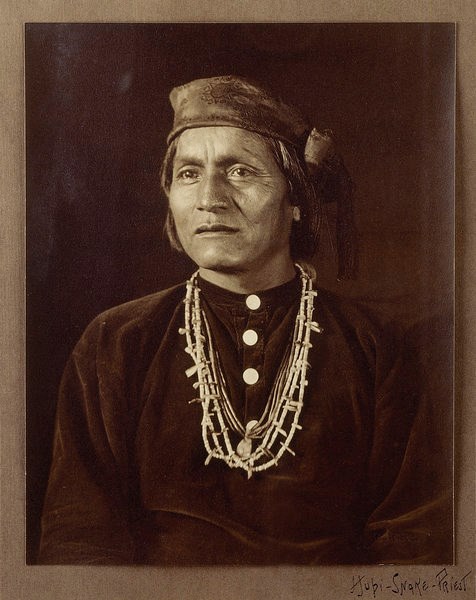