Caption Literature
A Fine Chinese Scholars Carved Zitan Wood Seal Box
18th Century – Qing Dynasty (1736-1795)
Size: 24cm wide, 15.5cm deep, 5cm high – 9½ ins wide, 6 ins deep, 2 ins high
Scholars boxes come in a variety of shapes and forms for both indoor and outdoor use as well as for travel. Boxes were often depicted in the paintings of the Ming and Qing period with the larger tiered ones being used to contain picnic and food items and the smaller used to carry paper, ink, writing and painting utensils and seals. Sometimes boxes were carefully sectioned and used to contain a scholars treasures. Precious objects of all varieties and materials were so often boxed in such a manner that the container itself began to take on significance as a work of art in its own right.
This finely made shallow box is somewhat too large for an ink-stone and therefore its shape suggests it carried seals. 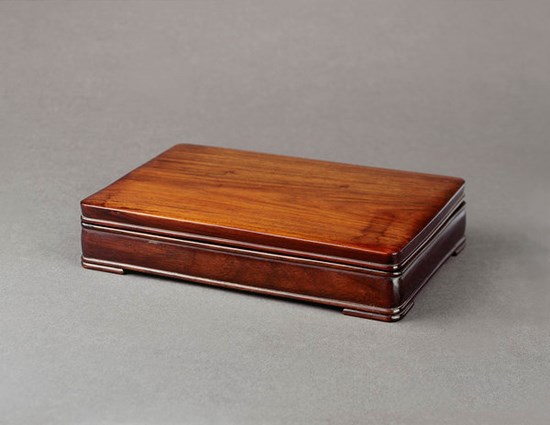