Caption Literature
A Pair of French Bronze Busts of the ‘Enlightenment’ Philosophers Voltaire and
Rousseau, After Antoine Houdon
On grey veined marble bases
Circa 1800
Size: 23cm high – 9 ins high
In France the ‘enlightenment’ was associated with the ‘philosophe’s’ Rousseau and Voltaire, the literary men and thinkers who were united in their belief in the supremacy of reason and their desire to see practical change to combat inequality and injustice. Voltaire (1694-1778) an engaged and liberal humanist, believed in a universe based on reason combined with a respect for nature, without foundation in any particular religion or tradition of revelation. He indefatigably fought for the right to a fair trial and for the freedom of religion. Rousseau (1712-1778) was a Genevan who contended that man is by nature good but is corrupted by society, which is in direct conflict with the doctrine of original sin. His most important work was ‘The Social Contract’ which outlines the basis for a legitimate political order.
The movement against established beliefs and institutions gained momentum throughout the 18th century under Voltaire and Rousseau. Through the publication of the Encylopédie (1731-76) their attacks on the government, the church and the judiciary provided the intellectual basis for the French Revolution.
Both Rousseau and Voltaire are interred in the Panthéon in Paris directly opposite one another. Rousseau’s tomb is designed to resemble a rustic temple recalling his theories of nature. Voltaire is remembered and honoured in France as a courageous polemicist who fought for civil rights, and he lives on through his sayings: ‘If God did not exist it would be necessary to invent him’. 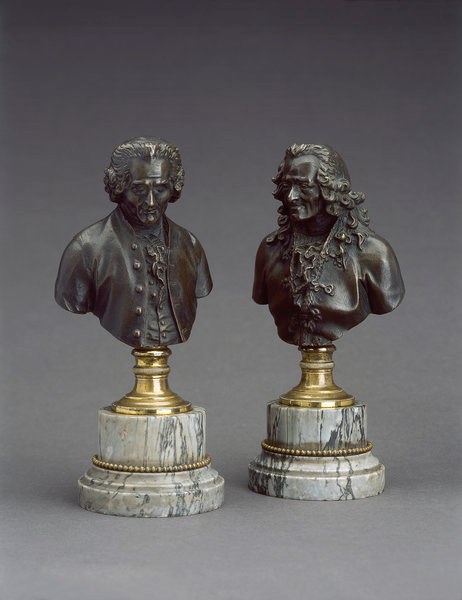