Caption Literature
A Fine North Italian Silk, Silver and Gold Thread Embroidery Depicting the Shroud of
Turin
Late 18th Century
Size: 29cm high, 36.5cm wide – 11½ ins high, 14¼ ins wide
The Turin Shroud is an ancient linen cloth bearing the image of a man who appears to have been physically traumatized in manner consistent with crucifixion. In 1988 the Holy See agreed to a radio carbon dating of the relic which subsequently proved inconclusive. Both sceptics and proponents tend to have entrenched views on the cause of the formation of the image on the shroud and as the Vatican, who presently own the cloth, will not allow any more independent carbon dating experiments to be carried out, the issue is unlikely to be fully settled to the satisfaction of both parties.
There are numerous reports of Christ’s burial shroud being venerated in various locations before the 14th century, but none of these are connected with certainty to the current cloth that is held in Turin Cathedral. In 1532 the shroud was damaged by a fire in the Chapel where it was stored in a reliquary. A drop of molten silver from the reliquary bore through the layers of the folded cloth which was then inexpertly repaired by Poor Clare Nuns with cotton patches. Another fire in 1997 threatened the shroud and a fireman rescued it from its display case and prevented further damage. In 2002 the Vatican had the shroud restored and the cloth backing and 30 patches were removed. The reverse side was then scanned and photographed which had previously remained hidden from view and using mathematical and optical techniques a ghostly part image of the body was found on the back of the shroud. In 2004 scientists exposed the faint imprint of the face and hands of the figure upon the cloth.
Whatever the scientific evidence eventually proves the Turin shroud has become a potent symbol of faith for the Catholic church and its followers. It is occasionally put on public display in Turin Cathedral and immediately becomes an object of Catholic pilgrimage. The next time the shroud will be shown to the world will be in 2025. 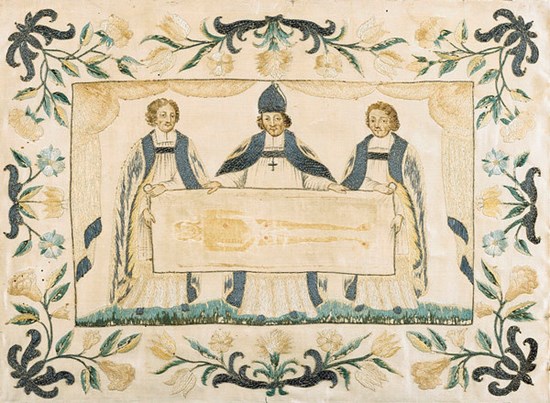