Caption Literature
A South Eastern Australian Aboriginal Parrying Shield
Incised with abstract designs, traces of red ochre
Old dry dark, smooth patina
Early to Mid 19th Century
Size: 87.5cm long – 34½ ins long
These shields originate from western Victoria, south east of the Murray River and are used for parrying the blows of clubs in individual close combat. Made from dense hardwood, they were incised with patterns made with the use of a possum tooth engraving tool, that presents the viewer with a visual puzzle, a characteristic of south eastern Australian shields.
Aborigines were closely attached to their land and to everything within that land and this powerful relationship is reflected in their art. A great deal of aboriginal art contains designs representing segments of their country. Thus all Aboriginal art has something to say and traditionally rested on the need for explanation by the designers owner and maker. Made to communicate ideas to specific persons or groups of persons the design would serve as a vehicle through which a vision of the natural world could be conveyed. 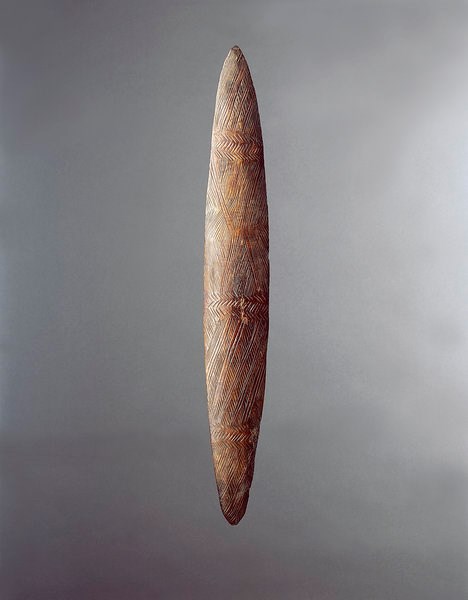