Caption Literature
A Fine and Rare Marquesas Islands Carved Coconut Tobacco Container ‘Putui’ or ‘Tui
Maimai’
Incised with four tiki figures in relief within geometric panels
Mid to Late 19th Century
Size: 11cm high, 8.5cm wide – 4¼ ins high, 3¼ ins wide
Tobacco was first introduced to the Marquesas in the 18th century by European early contact and was smoked in relief carved pipes of wood or whale ivory. These and the elaborately and carefully carved coconut tobacco containers were highly prized possessions that were sometimes buried with their owners or passed down to the next generation as valuable heirlooms.
It has been suggested that the tattoo motifs displayed on the bodies of Marquesan Islanders provided the inspiration for the surface ornamentation of objects. However, it is more probable that these two different expressions of the unique art form derive from a shared set of artistic conventions. 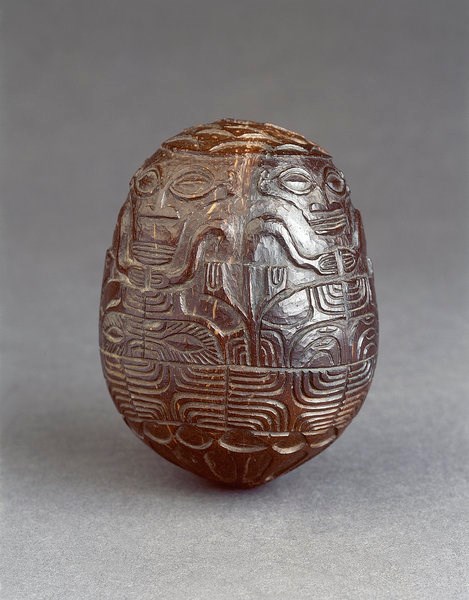