Caption Literature
A Very Rare New Zealand Maori Parrot Perch Snare ‘Mutu Kaka’
The wooden pierced shank top carved with a mask head, the remains of fibre attachments where once the snare was threaded.
Probably pre-contact. Untouched old smooth dark brown patina
18th Century
Size: 24cm high, 24cm deep – 9½ ins high, 9½ ins deep
The Maori hunters method of catching birds was based primarily on a knowledge of their feeding habits on various trees in the different seasons. Particular traps and snares were employed for each type of bird. The perch snare required the presence of the hunter to pull the string when a bird alighted on the perch and so a rough concealment shelter or hide had to be built in a selected forest tree.
Incantations and rituals accompanied the fixing of the platform and the hunter would then attach short cross bars to selected outer branches of the tree upon which to hook his perch snares so that they would project above the foliage and attract the parrots to alight on them. Sometimes tame decoy parrots would be used to attract others by means of their loud, shrill calls. The hunter would keep them tethered to him by means of a string tied to a carved green-stone (nephrite) or whale bone leg ring which he pulled to make them emit their cries. When a wild parrot alighted on the perch the hunter would pull the string so that the fibre loop caught the bird around the legs and imprisoned the parrot against the upright head of the shank. The hunter would then unhook the snare, lift it down, take out the catch, reset the loop snare and hook his apparatus back in position.
These perch snares appear to be unique to the Maori people of New Zealand, their use is not recorded anywhere else in Polynesia. 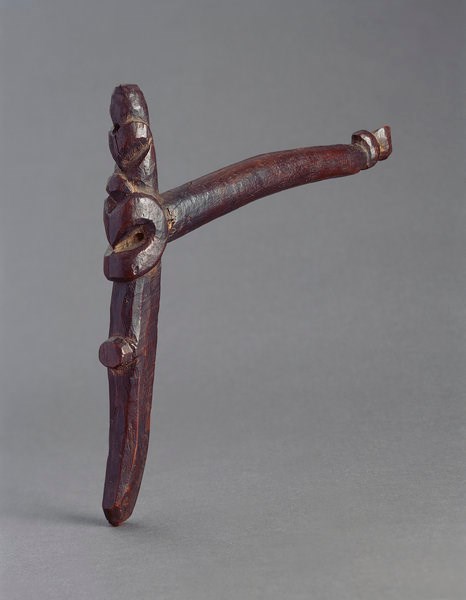