Caption Literature
Three Pre-Historic Lower Palaeolithic Flint Hand Axes
One with a ‘Royal Archaeological Institute’ label numbered ‘48’. A hand written label to the reverse reading: ‘St Asheul. Treville’s Pit’
Another (the largest) with a handwritten label reading ‘St Asheul 1874 Treville’s Pit’
Circa 200-150’000 years old
Sizes: 14.5cm long – 5¾ ins long (max.)
11cm long – 4¼ ins long (min.)
‘weapon very common amongst the ancient Britons’ (label for a flint hand axe in the Sir Hans Sloane collection)
The discovery of stone tools did not take place until the end of the 17th century. Of course they were not unknown, but they were not understood as the products of human manufacture. Despite Biblical references to stone tools and the knowledge of their use by the Native Americans, the distinctively shaped stone objects continued to be categorized as fossils. Old Worm (died 1655) illustrates perforated stone axes alongside a variety of non precious, semi precious and precious stones in the 1655 catalogue of his famous Museum of curiosities in Copenhagen. In the text he classifies them as ‘Ceraunia’ or thunderstones formed from lightening bolts hitting the earth.
However, in 1656 Sir William Dugdale published a book on the Antiquities of Warwickshire containing a carefully drawn engraving of a polished stone axe. He describes it without reference to Ceraunia and states that ‘divers flint stones’ had been found by ploughing on the north part of Oldbury fort. He goes on â€¦ ‘considering there is no flint in all this part of the countrie, nor within more than XI miles from hence, then being at first so made by Native Britain’s (sic) and put in a hole, board (sic) through the side of a staff, were made use of for weapons. In as much as they had not then attained to their knowledge of working iron or brass to such uses’.
Dugdale was a remarkable and observant antiquary, as the axe is now known to be Neolithic, made 6000 years ago by people who did not know how to work and use metal. 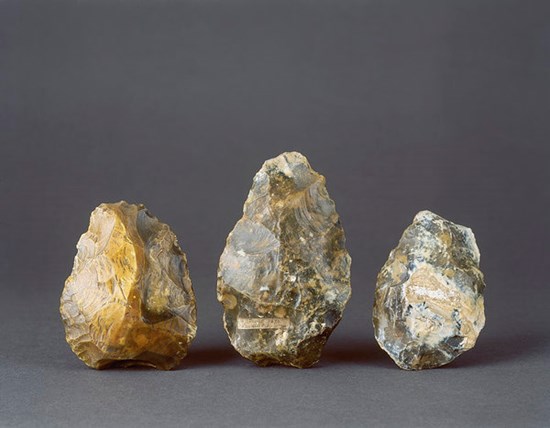