Caption Literature
A Rare South African North Nguni Zulu Girl’s Beaded Liondress and Three Roll
Waistband Together with a North Nguni beaded one roll waistband and two South Nguni
beaded necklaces
Glass seed beads, woven grass, sinew
Circa 1880
Size: a 89cm long – 35 ins long
b 84cm long – 33 ins long
c 40cm long – 16 ins long (approx.)
d 51cm long – 20 ins long (approx.)
Archaeological evidence from sites in Southern Africa shows that glass beads had been introduced into the area by Arab traders as early as the 11th century, and it is known from the records of Portuguese travellers dating to the 16th and 17th centuries that they traded beads in South East Africa for livestock, skins and ivory.
All Zulu beadwork is made by women, but it is worn as an adornment by both sexes often as an indication of age and marital status. Prior to the 1850’s the use of beads in the Zulu Kingdom was reserved exclusively for the King, women from the Royal enclosures ‘Isigodlo’, and high ranking officials. The Chiefs were able to monopolize and control the trade in beads for their own purpose until frequent and direct contact with colonial merchants facilitated the availability of large quantities and varieties of glass beads to a wider range of the indigenous peoples.
As the beads became more available and therefore cheaper, the techniques of production became more sophisticated involving the making of beadwork tapestries that were sewn together to form densely beaded fabrics over tubular ropes of grass. This technique of sewing rolls of beads over rolls of grass seems to be a characteristic of Zulu beadwork. 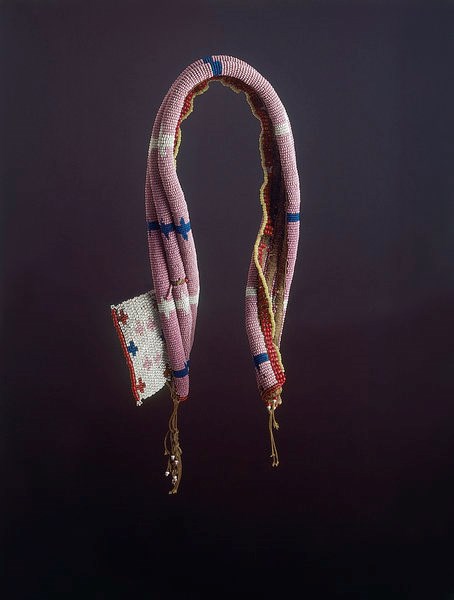 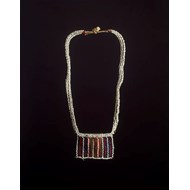 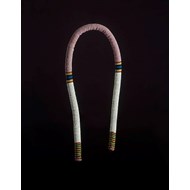 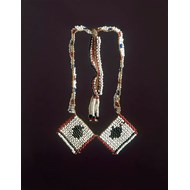