Caption Literature
A Curious and Interesting Gilded Cast Iron Model of a ‘Welsh Gold Nugget’
From the collection of the charlatan ‘Prince of Matua and Montferrat’
A handwritten label attached reading ‘Fac . simile of Great Nugget presented by the Welsh Miners to the Prince of Matua and Montferrat 1879. Original worth £ 300 . Found in Gwynfynydd’
Circa 1879
Size: 11cm high, 7.5cm wide – 4¼ ins high, 3 ins wide
The self styled Prince of Matua and Montferrat was in fact born Charles Ottley Groom Napier in Merchiston, Tobago in 1839. Son of a wealthy sugar plantation owner he developed an early interest in natural history. In the 1870’s he began calling himself the Prince of Mantua and Montferrat with subsidiary titles as Prince of Ferrera, Nevers, Rethel and Alení§on; Baron de Tabago; and Master of Lennox, Kilmahew and Merchiston. In 1879 he held a lavish banquet for 7000 guests in a specially constructed pavilion at Greenwich, the walls of which were hung with 700 illuminated leaves of vellum illustrating his invented pedigree. A passionate collector of minerals, plants and other curiosities he acquired a large collection of minerals and fossils between 1850 and 1890. His fossil collection is now in the Western Australian museum in Perth and a large part of his herbarium is preserved in Bolton museum. He died in 1894 in Maida Vale, his death being registered as that of Charles de Bourbon d’Este Paleologues Gonzaga, Prince of Mantua and Montferrat.
Welsh gold has been mined since Roman times and is easily extracted as it is found in seams or lodes like coal, and can yield up to 30 ounces per ton. The Gwynfynydd gold mine in Dolgellau opened in the 1860’s and has recently been restored to full production. It has proved to be one of the richest gold mines in Britain with a recorded output of 2000 ounces of fine gold since 1884. Traditionally the British Royal family’s wedding rings are always made from Welsh gold, which unlike any other has a distinctive reddish tint. 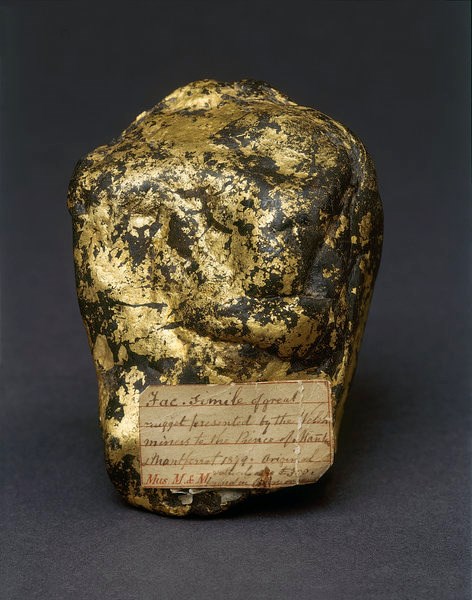