Caption Literature
A Fine New Hebrides, Vanuatu, Ambrym Island Plaited Fibre Bound Double Boar’s
Tusk Pendant Ornament
19th century
Size: 18 cm wide, 20 cm long – 7 ins wide, 8 ins long
cf a 1903 photograph, (F6092), taken by Count Rudolf Festetics of Tolna on his voyage to Vanuatu, of an Ambrym woman wearing a similar pendant around her neck that is now in the Hungarian national Museum’s Ethnographic collection, Budapest
It has been asserted that Captain Cook introduced pigs into the Pacific on his voyages of discovery but according to local knowledge the fine tusked boars of Vanuatu are Melanesian pigs and indigenous to the Islands of the Pacific rim are not descended from European stock. Tusker pigs are a distant species ‘Sub Papuensis’.
In Vanuatu tusks are a sign of a man of rank and consequently the most valuable pigs are not the biggest, but those with the best developed tusks. It is little realised that these tusks are due to Vanuatu tribal intervention. A juvenile pig is taken at about 12 months old and secured with a strip of vine or rope. A short wooden stick is forced between its jaws and as quickly as possible a hammer and file is used to knock out its two upper canines. These are thrown away and the two cavities are packed with soft earth, herbs and leaves. Over several years, usually around eight, the two emerging lower tusks develop unimpeded into full circles. These valuable boars are kept in enclosures, fed scraps from the kitchen and often given coconuts. A Vanuatu proverb admonishes ‘A Chief feeds his pigs’. 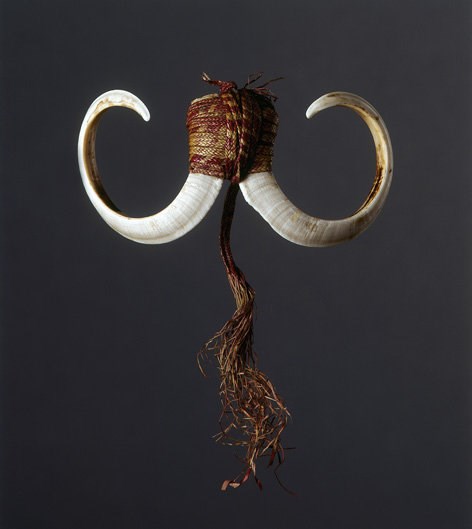