Caption Literature
A Collection of Five South American Humming Birds
Each with an old collection label – one reading ‘Exploration of CF Underwood in Costa Rica Boruca June 28 1906’
Early 20th Century
Sizes: 21 cm long – 8¼ ins long ( max ) – 7.5 cm long – 3 ins long ( min )
A: Sword Billed Hummingbird – Enisfera Enisfera
B: Streamertail – Trochilus Polytmus
C: Goulds Violet Ear – Colibri Coruscans
D: Bee Hummingbird – Calypte Helanae
E: Geoffroys Wedgebill – Schistes Geoffroyi
Hummingbirds are the worlds smallest birds consisting of 319 species that combine brilliant colour with diminutive size. Their wings beat so fast in flight they produce the humming sound responsible for their name. Their moving wings are practically invisible; just a blur to the human eye. They have a specialised long bill designed for removing nectar from flowers and this varies often to match the shape of the flowers at which the birds feed. They also feed on insects as energy rich nectar alone does not contain enough protein.
So brilliant and gem like are these tiny birds that at one time the Victorians used them for jewellery and the trade in them was tremendous. During the 19th century one London dealer imported more than 400’000 skins from the West Indies in one year alone. Bogota’s Colombia was the centre of this trade and ‘Bogota’s Trade Skins’ form the nucleus of many scientific collections of hummingbirds still in existence. Some distinctive species are still known only from one or two such early collected specimens and have yet to be found in the field by ornithologist’s. 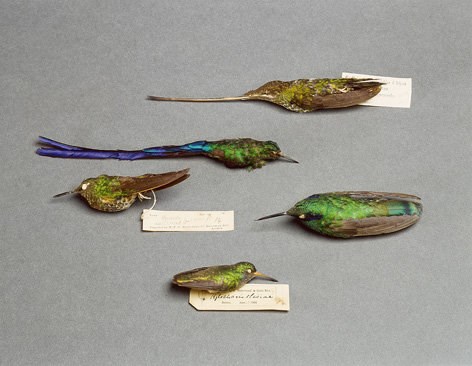