Caption Literature
A Collection of Eight Various Palaeolithic Pre-Historic Flint Tools
Each one marked with an inscription ‘Rickson’s farm at Swanscombe, Lower Gravel’ (3), ‘Brandon’, ‘Aylesford Kent’, ‘Swanwick Hants Palaeolithic Chopping Tool’ ‘Teddington 1937’, and a large grey flint hand axe marked ‘39’
150 – 200’000 Years Old
Size: 18 cm long – 6¾ ins long ( max. ) 6 cm long – 2¼ ins long ( min. )
During the Palaeolithic period man was a hunter and developed choppers, hand axes, and flake and blade tools to help him in his quest for meat. Three centuries ago the origin and nature of stone tools was misunderstood, they were thought to be ‘thunderstones’ or ‘thunderbolts’ caused by a flash of lightening. In France the ‘pierres de foudre’ were placed in the walls or under the doorsills of farmhouses in an attempt to deceive the lighting which, of course, never strikes twice in the same place. Early scholars called them ‘Ceraunias’, from the Greek Keraunos for thunder bolt, and it seemed mankind’s long use of metal had virtually obliterated the memory of stone as a material for the manufacture of tools and weapons. It was not until the 1st quarter of the 18th century that scientific discovery and evidence vanquished the belief in ‘thunderstones’.
Today, pre-historic stones are regarded as aesthetically pleasing in their elegant solution of the relationship between form and function. Admirably adapted to their purpose, and their boldness erasing the enormities of intervening time, their beauty transcends their prosaic uses. 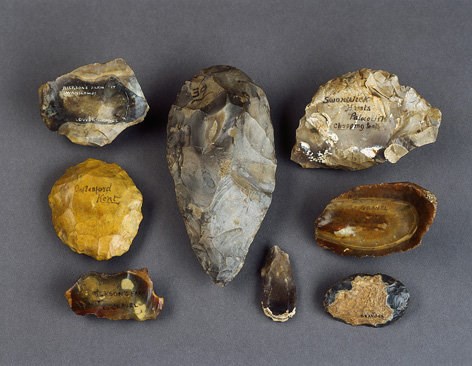