Caption Literature
A Native American Plains Indian Sioux Pipe Tomahawk
The wood haft decorated with brass tacks and file branding. The metal trade blade applied with a plain silver plaque and with an octagonal pipe bowl
Circa 1860 – 1870
Size: 58.5 cm long – 23 ins long
20 cm long – 8 ins long ( pipe bowl )
Romantically associated with the Native American Indian as is no other implement, the pipe tomahawk is unique to their culture. Although most peoples of the world had cutting axes and smoking pipes, only in America were both these functions fused into a single object. Over a period of 250 years it served variously as a functioning tool, as a ceremonial and decorative object and as a symbol of prestige.
However, because of its importance and constant use as a weapon the tomahawk became a symbol of war and for war potential. George Catlin spoke of the tomahawk as being thrown ‘with unerring and deadly aim’ and this accuracy was often acquired through the custom of throwing at small trees as a camp pastime. Ebenezer Elmer visited the Six Nations in 1776 and noted in his ‘Journal kept during an expedition to Canada’ that ‘they have the art of directing and regulating its motion, so that though it turns as it flies, the edge always sticks in the tree near the place they aim at’.
Specially made ‘presentation tomahawks’ were bestowed as gifts to important Chiefs to solemnize treaties and help ensure their friendship. As in this example these often had elaborate file branded or engraved decorations, and silver inlays to the blades, which would sometimes bear presentation inscriptions. Such tomahawks were often handed down through each generation as part of the regalia of leadership.
The addition of the pipe bowl to the hatchet blade around 1700 allowed for the addition of ceremonial tobacco rites to the other uses of the hatchet so that it became almost indispensable to Native American Indian culture and life. 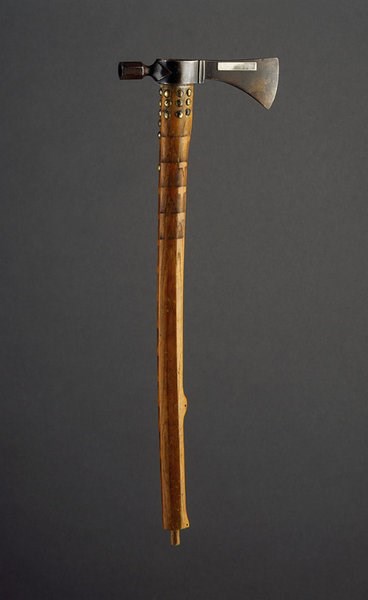