Caption Literature
A Rare Pre Columbian Amerindian Hollow Cast and Hammered Gold Vessel or Lime
Flask from Columbia
Probably Quimbaya Region
400-1000 A.D
Size: 14.5 cm high, 11 cm dia. – 5¾ ins high, 4¼ ins dia.
‘Gold is what gave them breath; for gold they lived, and for gold they died’
Juan de Castellanos { 1589 }
An Enduring feature of South American mythology is the legend of El Dorado, a name which conjures up fantastical images in the Western mind, but which simply means ‘The Gilded Man’. Gold was a sacred medium for many Pre Columbian civilizations owing partly to its brilliant incorruptible sheen as well as its ritual and mythological associations with the sun, the spirit world and fertility.
The El Dorado legend originated among the chiefdoms of Columbia where several distinct gold working styles have been identified. Ceremony was held upon the accession to power of a new ruler in the Columbian Highlands at lake Guatavita. After a period of seclusion in a cave the new ruler made a pilgrimage to the lake in order to make offerings to the chief deity. Upon arriving at the lakeside he was stripped of his finery and his body was covered with a sticky resin, onto which was applied a shimmering layer of fine gold dust. Thus prepared he set out into the lake accompanied by his attendants, who were four principal chiefs, decked out in elaborate accoutrements of gold. The raft itself was richly adorned and from four braziers the smoke of sacred incense rose into the air. As they journeyed across the water, the air reverberated with the sounds of flutes, trumpets and singing from the shore. When they reached the centre of the lake, the sounds were silenced and the new chief and his companions threw a huge pile of gold into the lake. They then made their way back to the shore where the new ruler was ceremonially greeted.
This ritual made a powerful impression on the Europeans who first witnessed it â€¦. ‘he went about all covered with powdered gold, as casually as if it were powered salt’ Gonzalo Fernandez de Oviedo, 1550. The image is a potent symbol of the power held by Amerindian myth and ritual over the European imagination and of the fascination that gold always exerted over mankind. 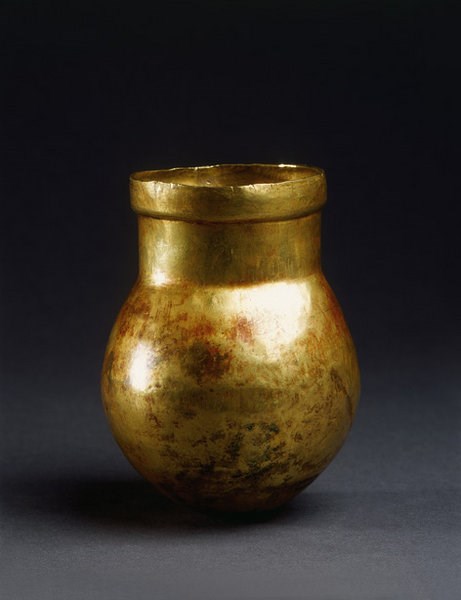