Caption Literature
A Pair of Gerrit Denys Island, New Britain, Shell and Dogs Tooth Ritual
Dance Anklets
With an old handwritten paper label reading ‘shell anklets Gerrit Denys group’
19th Century
Size: 5 cm long – 2 ins long ( approx )
Dogs teeth are a major form of currency in much of the Bismarck Archipelago. Necklaces, anklets and other ornaments often served as currency and were used as a bride price and were stored in large quantities packed into baskets. Dogs teeth were never very numerous as only the canines and those teeth behind the canines were used for jewellery, making a maximum of only four teeth to be gained from each dog. Thus their scarcity ensured their value.
Sometimes the teeth would be extracted after the sacrifice of the dog, but one account exists describing a live dog being buried up to its neck in sand so that the teeth could be easily extracted and presumably also saving the dog’s life . 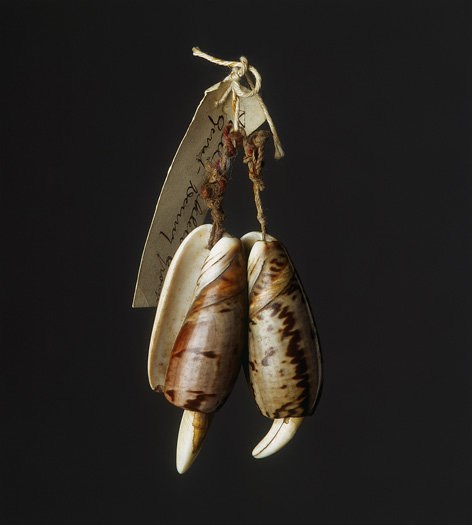