Caption Literature
A Rare Native American Indian Eastern Great Lakes, Woodlands, Iroquois Ceremonial
Cup Carved with a human effigy, burl maple wood bowl bound with an etched brass strip to the carved wooden handle
Circa 1830-50
Size: 15 cm high, 14.5 cm wide – 6 ins high, 5¾ ins wide
The carving of human effigies on bowls, cups, spoons, ladles and pipes which represented guardian spirits was an ancient and widespread expression of woodland’s Indian art. In 1851 Lewis Henry Morgan wrote of the Iroquois ‘their wooden implements are often elaborately carved. Those upon which the most labour was expended were the ladles ‘Ahdoqua Sa’, of various sizes used for eating hominy and soup. They were the substitute for the spoon and hence every Indian family was supplied with a number. The end of the handle was usually surmounted with the figure of an animal, such as a squirrel, a hawk, or a beaver; some of them with a human figure in a seated posture; others with a group of figures in various attitudes as those of wrestling or embracing’.
The chip carved decoration on the handle of this cup is the same as that seen on crooked knives, the carving on which was in turn influenced by Northern European motifs. The carved human effigy strongly resembles that shown on a bowl in the Diker collection ( DAC 566 ) that is of an earlier date; it too appears to be wearing a flat cap. 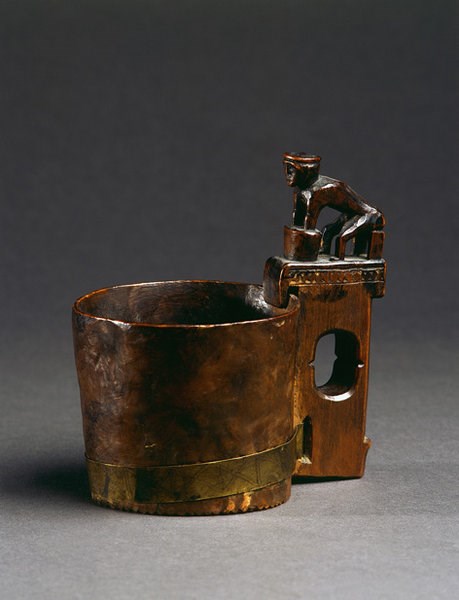