The Unusual Ancestral Skull of a Pygmy Andamanese Islander

Caption Literature
The Unusual Ancestral Skull of a Pygmy Andamanese Islander
Old polished patina
18th Century or earlier
Size: 13.5 cm high, 14 cm wide, 19 cm deep – 5¼ ins high, 5½ ins wide, 7½ ins deep
The Andaman Islands are composed of 204 small lush tropical islands in the Bay of Bengal. Until the late 1800's the islands were isolated and the inhabitants feared as head hunters. Early mariners wrote speculative accounts of them as ferocious dog headed cannibals. Colonial settlement in the 19th century by the English and Indians quickly affected the indigenous populations. Few of the Great Andamanese tribal group survive today due to both introduced disease and to physical changes in traditional lifestyle. Only about twenty five Great Andamanese now live on Strait Island.
Generally regarded by early anthropologists as one of the 'living examples of the oldest races of man' there was a scramble at the end of the 19th century as foreign diseases affected the population to understand the unique role played by the Andamanese in evolutionary theory and to record and collect the culture before it became extinct. Exotic souvenirs from these quickly disappearing people of a distinctly small stature became prized items in European collections.
The Great Andamanese exhume the bones of their dead some months after burial, the bones are then washed in the sea and wept over. The skull and jaw bone are kept, sometimes painted, and the jawbone often worn as a memorial.

The Unusual Ancestral Skull of a Pygmy Andamanese Islander 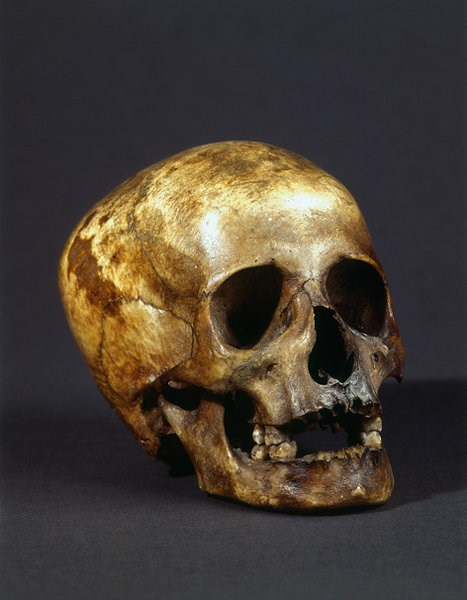