Caption Literature
A Rare Ancient Chinese Gilt Bronze Weight in the form of a seated Bear-Dragon
The eyes, nose and cheeks pierced, a dragons mane running along his back, his paws clutching his sides
Han Dynasty 206 – 220 A.D
Size: 6.5 cm high, 3 cm deep – 2½ ins high, 1¼ ins deep
The dragon was regarded in Chinese mythology as a celestial animal and symbol of the Emperor. The bear was regarded as a dignified spirit and a mysteriously powerful inhabitant of the spirit mountains. Although commonly depicted in the Han dynasty, bears are somewhat unusual in the repertoire of ancient Chinese animal motifs and were rarely represented in other periods of Chinese history.
Bears inhabited the forests of northern China and ornaments with bears have been found in tomb contexts as far north as Transbaikalia and as far south as the tomb of the King of Nanyue of 122 B.C in Canton. They were kept in Imperial Game Parks, used in bear baiting and had an exorcistic role. The bear-like god of war 'Chiyou' performed exorcist ceremonies in times of drought. The word for bear 'Xiong' sounds the same as the word for brave or powerful 'Xiong'. This is one possible reason why bears paws were eaten; in order to confer bravery. 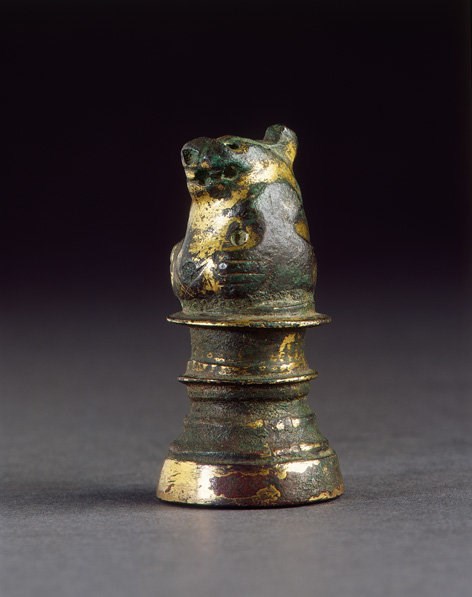