Caption Literature
A Fine Pre-Historic Hopewell Peoples Native American Indian stone Effigy Pipe
In the form of a frog
Inscribed in black ink ‘Greene Co. Ohio’
100 BC – 200 AD
Size: 8 cm wide – 3 ins wide
The Hopewell culture was without obvious parallels in other parts of America. The Hopewell were agriculturalists who grew maize for subsistence and tobacco. They built great earthworks for military and ceremonial purposes and the stone pipes of the Hopewell are particularly associated with their tradition of burying the dead in mounds. These mounds contained mortuary houses where the dead were cremated in shallow clay lined pits. Grave offerings were placed with the human remains made from a large number of different exotic raw materials such as grizzly bear teeth from the Rocky mountains, conch shells from the coast of the Gulf of Mexico and copper from the Upper Great Lakes. The artefacts found often included pipes carved with an animal or human effigy.
The pipes were made of hard flint clay probably using copper tools and almost invariably the head of the animal faces the smoker. These pipes are undoubtedly the finest naturalistic carvings of pre-historic America, but their exact meaning and use remains unclear. 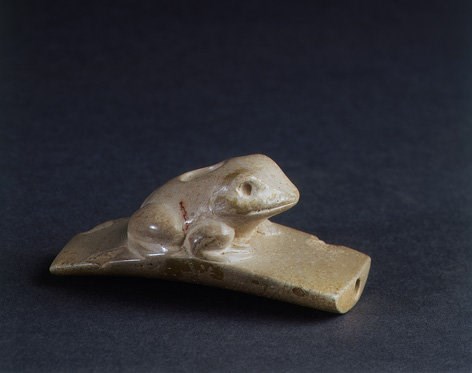