A Rare Specimen of a Galapagos Islands Tortoise

Caption Literature
A Rare Specimen of a Galapagos Islands Tortoise
‘Geochelone Elephantopus Porteri’ from Indefatigable Island
19th Century
Size: 33 cm high, 61 cm long, 44.5 cm wide – 13 ins high, 24 ins long, 17½ wide
Charles Darwin writing in the Journal of the Voyage of H.M.S Beagle in October 1835 stated 'The Natural History of these Islands is eminently curious and well deserves attention'.
Located on the equator in the east Pacific about 600 miles west of Ecuador the Islands originally were home to fourteen different populations of tortoises each separated from its neighbours by the sea, or in the case of Albermarle Island by stretches of impassable fresh volcanic lava.
The Commander of a whaling vessel, Cookson, wrote in 1875 that the tortoises of Indefatigable Island were so reduced that they were no longer hunted for their oil; he was assured that a search of a fortnight might not result in finding a single individual. Today the Ecuadorian National Park Service estimate their number at 3000 - 3500 having successfully diminished the presence of non-indigenous feral pigs in the tortoises nesting areas.

A Rare Specimen of a Galapagos Islands Tortoise 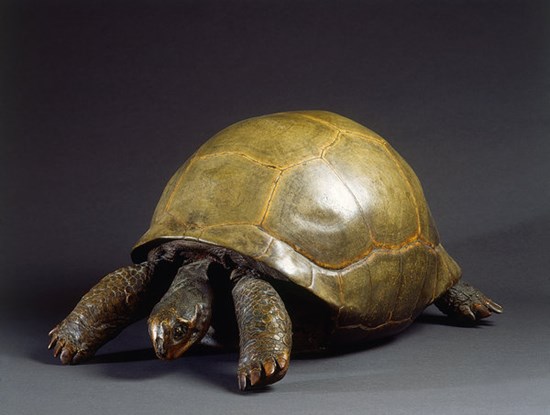