Caption Literature
A Papua New Guinea, Middle Sepik River, Iatmul People Female Figure
Wood with an old encrusted surface with traces of pigment. The ears pierced twice
19th Century
Size : 21.5 cm high, 11 cm wide, 5 cm deep – 8½ ins high, 4¼ ins wide, 2 ins deep
Apart from the Massim district the most important motif in the art of Papua New Guinea is the human figure. Its treatment is always highly stylised with locally varying degrees of naturalism. The Sepik River basin is an area of unrivalled artistic richness and Sepik art is predominately one of three dimensional carving although colour is used boldly and extensively to emphasize sculptural forms.
The Iatmul have the most lavishly decorated ceremonial men's houses in all New Guinea filled with sculptural images. The building itself symbolises the ancestors protective mantle which settled on the river in the form of a floating island under which a crocodile, another embodiment of the ancestors, may lie in wait. This island marks the gateway to the world beneath the lakes and lagoons and river waters of the Sepik where the pre-human ancestors dwelt.
This female figure carving may once have been attached to a suspension hook and would have hung in a men's house. 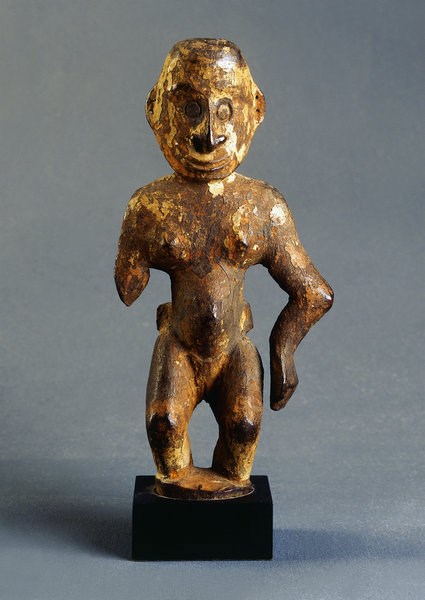 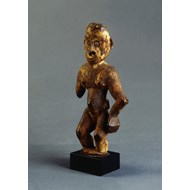