Caption Literature
Three Historically Important Native American Plains Lakota Sioux Dolls
Found by John Bathurst, a scout with the US Cavalry, in the tipi of ‘White Shirt’ after the sacking of Chief Big Foot’s camp on December 29th 1890 at the infamous Massacre of Wounded Knee
Trade cloth, cotton, deerskin, sinew, pigments and glass beads
Circa 1880
Size : 33 cm high and 16.5 cm high (each) – 13 ins high and 6½ ins high (each)
John Bathurst was a scout with the 8th US Cavalry and had a ranch in South Dakota near the Sioux reservation in the late 19th century. These dolls were kept in his family and ‘tradition has it that the head of the largest doll was made from a scalp’. Bathurst witnessed the awful carnage of the massacre of Wounded Knee which was a result of both ignorance and a misunderstanding by the authorities of the powerful sacred Ghost Dance ceremonies and of the last ditch attempt of a tired tribal nation led by an aged, ill Chief to survive.
Dolls are mirrors of tribal identity and the Native Americans have a long tradition of making dolls for religious ceremonies, for play and instruction, and since the 18th century for trade and sale to Euro-Americans. Dolls dressed in the image of a shaman were used as helpers in curing ceremonies where they were believed to enter the patients body and with supernatural power expel the evil spirits causing sickness.
The faces of Plains Sioux play dolls tended to be blank and the child would read into the doll the features of his or her choice, making the doll come alive in their imagination. The largest of these three dolls has two strands of powder blue beads hidden beneath the neckerchief. They are fascinating, historical and social documents of an important period of Native American history. 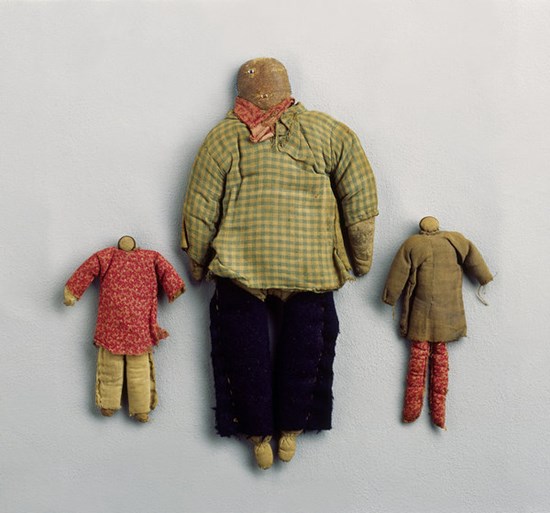