Caption Literature
A Rare Native American Iroquois or Mohawk Peoples Wood Bow
Etched with pictographs of a figure wearing three feathers and holding a tomahawk, a turtle, a bird and a bear
Circa 1850 – 60
Size : 107 cm long – 42 ins long
This bow sits well in the hand being made from three lengths of steamed splinted, probably ash, wood. The grip bears traces of red ochre pigment and is worn with use. These bows were seldom more than three feet long (1 metre). They were held in a horizontal position and were effective at short range. The strings would have been made of twisted animal gut.
The Iroquois clan symbols were the bear, wolf, the deer and the turtle, and incised pictographs of these animals on hunting equipment would transfer their attributes to the hunter. The incised outlines of the pictographs on this bow display an earlier simplified economical graphic style used for native material, rather than the more naturalistic curvilinear style used for objects made for Euro-American trade.
The Iroquois tended to have less of a nomadic life than other native nations and they lived in what is now upper New York state. They resided in more or less permanent settlements where they constructed sturdy long houses out of poles and bark which could accommodate several families at once. Adjacent to their palisaded villages were fields of corn squash, beans and tobacco. The women were primarily responsible for raising the crops while men saw to hunting, fishing and the protection of the village. 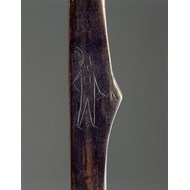