Caption Literature
A Gentleman’s Grand Tour Collection of Roman Antiquities and Floor Inlays
All with old handwritten labels
1st – 2nd Century AD
‘Roman antiquities – 1. Roman Lamp from Hadrian’s villa, Tibur’. The base of the pottery lamp with another label giving the same provenance.
‘Pavement from Hadrian’s Bath’s Rome’. The floor fragment with same inscription in ink.
‘Marbles from the Palace of the Caesar’s Rome’. A green straw porphyry floor inlay bearing the same provenance in ink, and two red porphyry floor inlays inscribed in ink ‘Rome’. Another of Sienna marble inscribed ‘Pal. of the Caesars, Rome’. All of these pieces are from a Roman inlaid variegated marble floor.
‘Pompeii – 1. small fragments of pottery – 2. pavement from Sallust’s House – 3. piece of the Temple of Jupiter – 4. fragment from Pompeii – 5. Roman bronze coins. – A fragment of red painted wall fresco labelled ‘Herculaneum’, and a piece of marble sculpture inscribed ‘Eleusis, temple of Ceres’’.
Since the days of Raphael who worked with the Popes to safeguard the relics of the antique city all excavation inside Rome had been controlled. Outside Rome however the great ruins of the Campania landscapes were eagerly explored. The grandest and most splendid of these was Hadrian’s villa, one of the great treasure mines of Renaissance Italy, and where some of Europe’s most celebrated ancient statues were excavated. Italy’s antiquarians and the excavators of Hadrian’s villa were however only obliged to give just a third of their finds to the Pope. The remains of Hadrian’s villa became the inspiration for hundreds of English gardens, and in the 18th and early 19th centuries Tivoli and the plain below filled with ruined palaces and temples, half buried statues and crumbling mosaics became the most dreamt of Grand Tour destination in Europe. 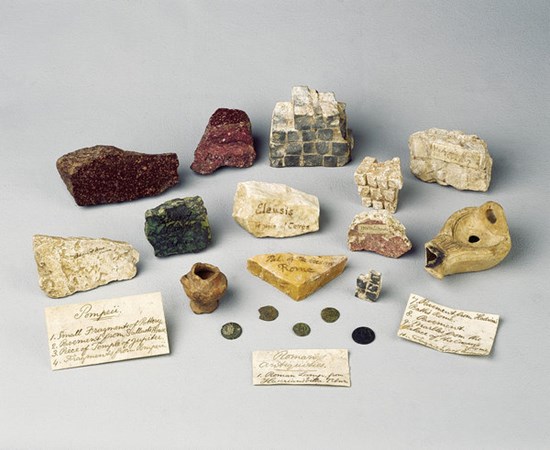