Caption Literature Exhibition
A Rare Celtic Early Iron Age Pagan Limestone Sculpture of a Female Standing Figure
1st Century BC – 1st Century AD
Size : 94 cm high, 27 cm wide, 21 cm deep – 37 ins high, 10½ ins wide, 8¼ ins deep
‘The whole Gallic people is exceedingly given to religious superstition’
Julius Caesar ( 100 – 44 BC )
This figure represents a Celtic Goddess, perhaps the Welsh deity Modron or the protectress of horses Epona who was later adopted by the cavalry sections of the Roman army. Her hands probably once held fruits symbolic of her fecundity and maternity.
The Celts were concerned with the concept of a mother Goddess who presided over mortals and they visualised the Gods themselves as belonging to and being controlled by a great divine mother, nurturer of the Gods and of the land with which like all the Celtic Goddesses she was particularly concerned.
At the end of the pre Roman Iron Age complete human figures were more commonly represented in Celtic art especially in the form of divine imagery. These figures were associated with sanctuaries and wells where they were often found and the tradition of early Christian ‘holy wells’ may have had its genesis in the many Celtic sacred springs and wells that had become the focus of curative sanctuaries in the Roman period. The perception of water as a healing force was equally prominent in pagan and Christian religion and it is striking that Celtic art in the Roman and early Christian period remained constant in its imagery.
It firmly retained the identity that first manifested itself in the middle of the 1st Millennium BC despite the powerful influences caused by the Roman conquest of Celtic lands and later by the introduction of a new monotheistic faith.
Celtic Goddesses regularly appear in the vernacular literatures of Britain and they seem to contain genuine memories of the powerful female deities who when they ceased to be actively propitiated became embedded in the folk memory and perpetuated in the tales and topographical legends of the country.
Exhibited Celtic Stone Sculptures 1989, Karsten Schubert and Rupert Wace 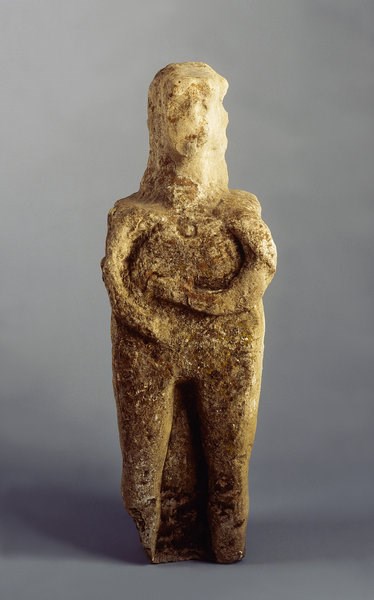