Caption Literature
A Fine Loango, West African, Kongo Peoples, carved Ivory tusk
19th Century
Size : 67 cm long – 26½ ins long
cf See : Finch and Co catalogue no. 2, item no 73, catalogue no. 4, item no. 52, and catalogue no. 5, item no. 64, for other examples
Ivory has been traded since the 15th century in the area around the mouth of the Zaire river, and under the influence of the first Portuguese traders Kongo artists began to carve ivory into impressive objects for the foreign European travellers.
Relief carved in a spiral band, images of slaves, men carrying fish, traders haggling and presiding colonial dignitaries process in single file to the tip of the tusk.
These tusks were carved between 1830 and 1900 using iron tools in workshops along the Loango coast. The native artists of these workshops adapted the naturalism and expressive power of their traditional art to produce these unique objects depicting the commercial trade and activities of European and African merchants. 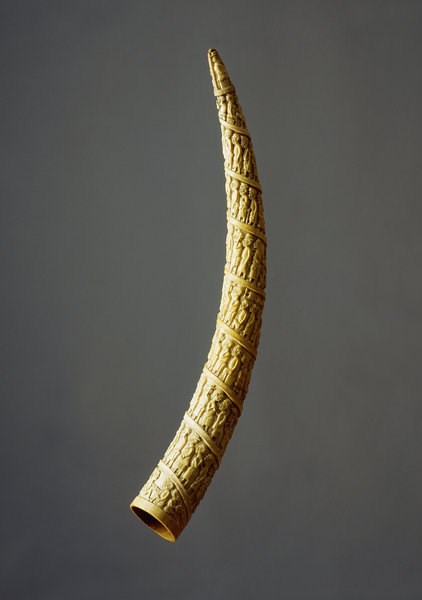