Caption Literature
A Fine Derbyshire Blue John Tazza
Early 19th century
Size : 20 cm high, 14 cm dia. – 8 ins high, 5½ ins dia.
Fragile, mysterious, beautiful and unique to Derbyshire is Blue John. No two pieces of this curious mineral are alike. The colours in bands range from purple and dark blue to yellow, buff and off white, and their disposition is always different. The strange attraction of this Derbyshire spar has been recognised for hundreds of years. Blue John is uniquely present only in the caverns of Treak cliff as Castleton, although other varieties of fluorspar are known in small quantities elsewhere in the Peak District.
It is said that the name Blue John is corruption of the French description of its colour ‘bleu et jaune’ meaning blue and yellow. It was originally discovered by lead miners as veins in the caverns and mines and in the 17th century was used as ordinary fluorspar in smelting to improve the fluidity of the slag.
In the 18th century it became more valuable and as a semi precious stone was made into bowls, vases and goblets while artist / craftsmen such as Mathew Boulton set pieces in ormolu mounts which became highly desirable objects that are now prized by collectors all over the world. 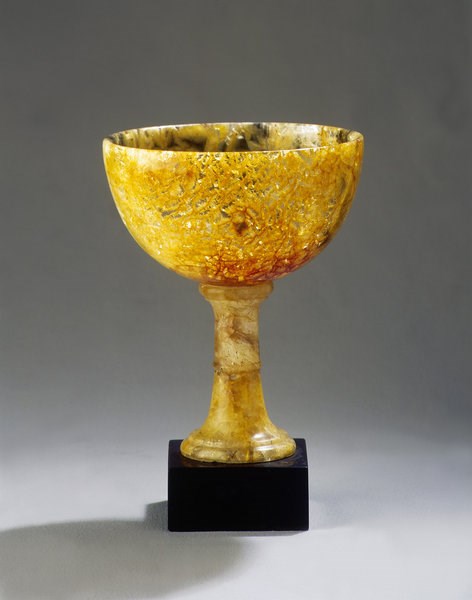