Jewellery was found in graves at the Sumerian city of Ur in what is now southern Iraq in excavations carried out by the archaeologist Sir Leonard Woolley in 1934.
The Ur cemetery contained graves spanning five hundred years from 2600 to 2100 BC. The graves dating from 2500 BC were vast mass interments containing one principal occupant, thought to be Royal, and many other court attendants accompanying their Queen or other Royal dignitary to the next world. Christened the ‘death pit’ by Woolley, these Royal tombs were sensational, containing chariots and statues plaited with gold, fine cups and jewellery, musical instruments and furniture.
The jewellery was an important part of their Summerian court dress and Sir Leonard Woolley reconstructed the essential appearance of many pieces by careful noting of the position of the jewellery on the skeletons. The main materials were gold, lapis lazuli, carnelian and silver, all of which were excavated in great abundance and must have been imported ancient Mesopotamia as raw materials as they do not occur there naturally.
Woolley worked without the first class resources of the German archaeologist Koldeway, famous for excavating the mighty gates of Babylon at the beginning of the 20th century and that now stand in Berlin’s Vorderasiatisches Museum. However, as a brilliant and practical craftsman working with the simplest of materials, and under the most difficult circumstances Sir Leonard Woolley achieved the successful excavation of one of the ancient world’s great archaeological treasures. 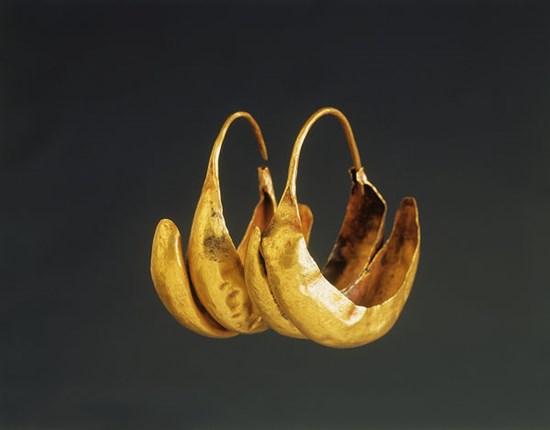