Caption Literature
A South Western Native American Hopi Kachina Doll
Inscribed in ink to the cotton shirt ‘MR8YY8’ (possibly an old collection number)
Cotton-wood, gesso, glass beads, feathers, tin-cones, pigments, silk, cotton cloth, wire nails
Circa 1900
Size : 21.5 cm high – 8½ ins high
The Katchina cult is an ancient and persistent one revolving around the Hopi need and deep respect for water which ensures the corn’s growth and is the essence of life. Wall murals excavated at the Hopi ruin of Awatovi dating to around 1500 AD show a pictograph of a dancing Katchina.
Men take on the roles of these supernatural spirits of the Pueblo villages dancing in masked ceremonies that often coincide with the planting and harvesting of crops. Described by Erna Fergusson in 1920, it is a powerful scene : ‘Against the dun coloured rocks was a brilliant figure of turquoise, blue and dull green. As he came closer, uttering his queer hoots, he picked out the details of his costume : a turquoise – blue mask with snakes painted under the eyes, feathers sticking out of the ears, feathers on top, a collar of spruce. His body was painted green and yellow, and his moccasins were brilliant blue â€¦.. He had brought dolls and gay coloured rattles for the girls, bows and arrows for the boys, and for both the long, pale green sprouts of the beans which had been forced out in the over heated kivas. All the time the dancer kept his feet moving in short jerky steps, a little as though to fight the cold; but we knew that this constant motion and the high falsetto hoots were to create the illusion of being of another world’.
The dolls representing these beings are particular specialities of the Hopi and Zuni. There are over 200 identified spirits each holding a portion of the spirit power belonging to the Kachina it represents. Carved of cotton-wood they are painted and dressed in the clothing, jewellery and feathers specific to each Kachina. They are presented to the children by the Kachina men during the winter and summer ceremonial dance cycles and are didactic objects that are used as part of their religious training and initiation. The children learn to recognise the precise details of each doll and understand their symbolic nature, each one bringing and sending different spiritual blessings for the Pueblo. They are treasured objects and are hung on the walls or from the rafters of the house where they remain in constant view of the family below. 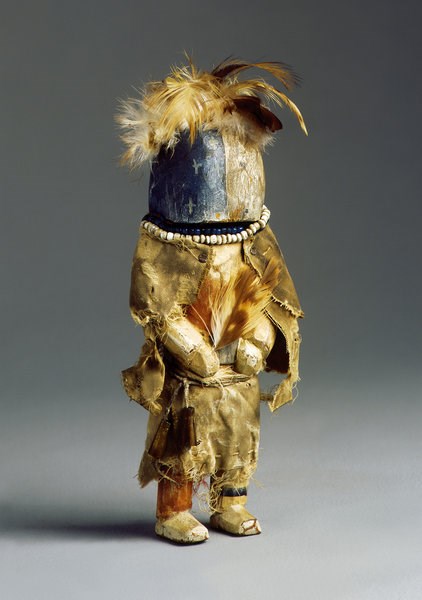