Caption Literature
A Rare North West Coast Haida Carved Argillite Panel Pipe
British Columbia
Circa 1840-1860
Size : 8.5 cm high, 40 cm wide, ¾ ins deep – 3¼ ins high, 15¾ ins wide, ¾ deep
The soft black stone argillite, a carbonaceous shale, is found in a quarry in the Queen Charlotte Islands near Skidegate. It is soft enough to cut with ordinary wood working tools and carving with a sharp knife leaves a beautiful black lustre that needs no further polishing.
It is thought that the Haida began to make these carvings as a response to their observation of the work of white sailors 'scrimshaw' in about 1820. It was a commercial art aimed at a foreign market and as such was an acceptable venture to the ruling white population as it earned a cash income for the Haida without contributing to any ceremonial practice. Thus the Haida artists were able to retain certain aspects of their culture at a time when it was under increasing threat.
After 1820 Russian, American and European travellers frequently mentioned it and even more frequently purchased it. After 1830 European imagery became more common with representations of the white man, his clothes, his dogs and his boats being carved in argillite. This panel pipe shows a fantastic group of interlocking and related mythical figures created with the persistence of a wood carvers approach to a new medium. By the 1830's full piercing of the stone between the figures became the signature of the pipe carvers. By then these panel pipes also started to forego the functional element of a bowl for tobacco, demonstrating that the buyers looked to the artistry of the sculpture as a display or presentation piece.
These works of art are important records of cultural exchange and cultural survival as the subtle changes in these argillite carvings conveys much about the history of the Haida people during the 19th century. 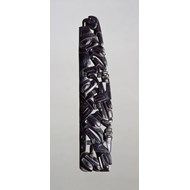