Caption Literature
A Collection of Eighteen Roman Bronze Votive Phallus
1st – 2nd Century AD
Size : 11 cm long ( max ) – 4¼ ins long ( max )
The Romans identified the phallus as a talisman and it had a prophylactic and apotropaic power. It is one of the most complex and omnipresent symbols in the life of ancient man. Linked to the origin of life the phallus was a generative power symbolising abundance and happiness. Considered by the Romans as a life force of nature it was often represented as an autonomous being with legs and wings suggesting the idea of its power and immediacy.
These pendants would have been worn as amulets to protect against the 'fascinum' or evil eye. In fact they were worn to protect against every threat to the health and welfare of the individual and his family.
Such displays of virility were common to all ancient civilizations, their origins tied strictly to the fertility of the land. The Roman God Priapus was always portrayed with an enormous member. The son of Dionysus and Aphrodite he was the God of fruitfulness, the protector of doors and market gardens, of bees and vineyards.
The phalluses reproduced on the paving blocks of Roman city streets, the bronze phalluses in bizarre lamp holders that hung from the ceilings of shops and inn's, and those painted behind the front doors of the aristocracy were all considered a sort of 'lucky charm'. The protective value of the phallus was recognized by every one, young and old, and did not upset anyone's sensibilities. 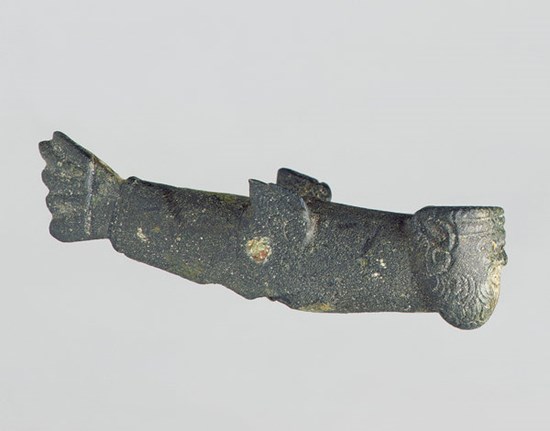 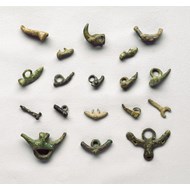