Caption Literature
A Rare Large Gibeon Iron Meteorite of an Irregular and Sculptural shape
Approx 4 – 5 Billion years old
Size : 44cm wide, 30.5 cm high, 16 cm deep – 17¼ ins wide, 12 ins high, 6¼ ins deep
Weight : 47 kilograms – 7½ stone
Meteorites are bodies of extra terrestrial material that while travelling through Space are trapped by Earth’s gravitational field. As they enter the Earth’s atmosphere they partly melt. As they slow down their surface solidifies again, forming a dark glassy fusion crust. Consisting of mainly nickel-iron alloys, kamacite and taenite meteorites are outstandingly different in mineralogy from terrestrial rocks and are important as they provide the best evidence we have for the composition and early history of the solar system. In fact the composition of some meteorites approaches that of the interior of our planet about which we have little direct information.
Fewer than ten meteorites which are seen to fall to earth from space every year are recovered and only some 2000 authentic meteorites are recorded. The deep cavities in the surface of these iron meteorites may have been caused by collisions in Space, fragmentation in flight, weathering or impact with the earth’s surface. They are always excessively heavy for their size.
Scientific theory speculates that every million years or so an asteroid one kilometre wide or more hits the earth with catastrophic results. It is believed that the last ice age, 65 million years ago was caused by one such meteorite 10 km wide bringing extinction to the Dinosaurs and their world. 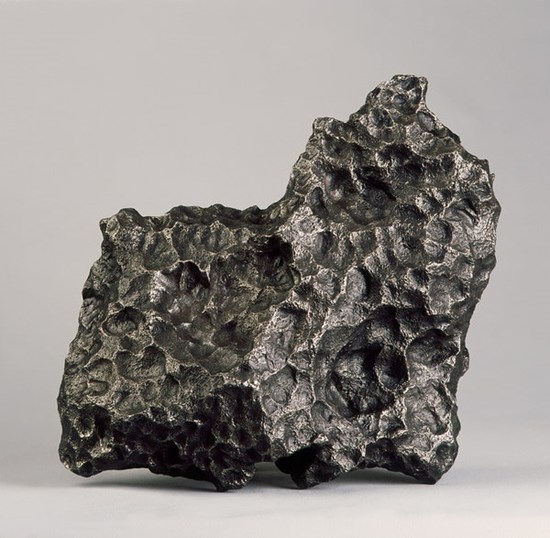