Caption Literature
A Rare Bering Sea Eskimo Walrus Ivory Miniature Shamans Mask
18th / 19th Century
Size : 3 cm high – 1¼ ins high
The small size of this amuletic sculpture does not detract from its great vitality, it exudes intensity and power. It is a guardian spirit, and demonstrates the exceptional creativity of the Eskimo artist in using dramatic effect to give visual substance to religious belief.
These miniature masks were often carved by shaman's or other carvers working under their directions, and represent spirits usually of animal helpers which the shaman has encountered on his visits to the spirit world, sometimes they represent the spirit of places, of ancient objects or of heavenly bodies. Their purpose was to ward off evil influences and exorcise malignant spirits which threatened misfortune to the community, and to appease and honour the souls of food animals which the group had killed so that their malice might be averted and a plentiful supply of meat ensured for the future.
The shaman carvers had to draw on their imagination to produce forms which although recognisably human reflected the awe inspiring, bizarre and terrible spirit creatures which they alone had access to and could control. Thus many of the masks are grotesque and as they represent the sprits themselves are carefully made with attention to symbolism. 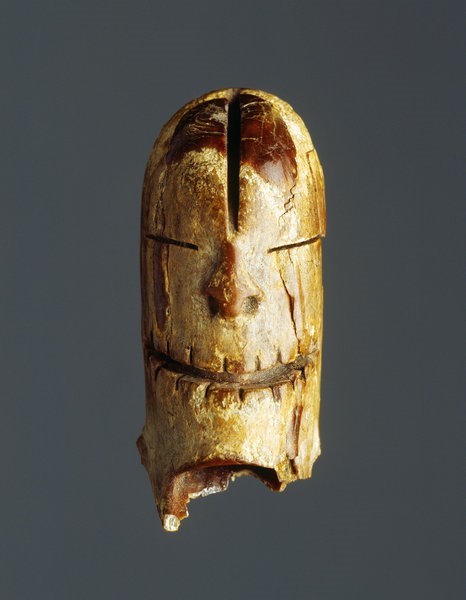