A Pair of Sailors Bookends, fashioned from the teeth of a Sperm Whale

Caption Literature
A Pair of Sailors Bookends, fashioned from the teeth of a Sperm Whale
( Physeter Catoden ) set into mahogany bases weighted with lead
Mid 19th Century
Size : 23.5 cm high, 13 cm wide – and 19 cm high, 14 cm wide
9¼ ins high, 5¼ ins wide – and 7½ ins high, 5½ ins wide
The teeth of the sperm whale are only found in the lower part of the whales jaw and cannot bite or chew due to the lack of corresponding upper teeth. Rather than chewing they are used to cut the squid they eat into large chunks. Ranging from four to ten inches in length there could be as many as 50 teeth in a large whale.
The lower jaw was the first part of the whale that was hoisted on board ship, but it was not until all the money making work was completed that the teeth were distributed to the crew. Considered worthless by the whaling industry, custom and tradition dictated that they be given to the whalers who were encouraged to scrimshaw and make artefacts so as to obviate the possibility of trouble making through boredom, wretched food and terrible living conditions on board ship during long sea voyages.

A Pair of Sailors Bookends, fashioned from the teeth of a Sperm Whale 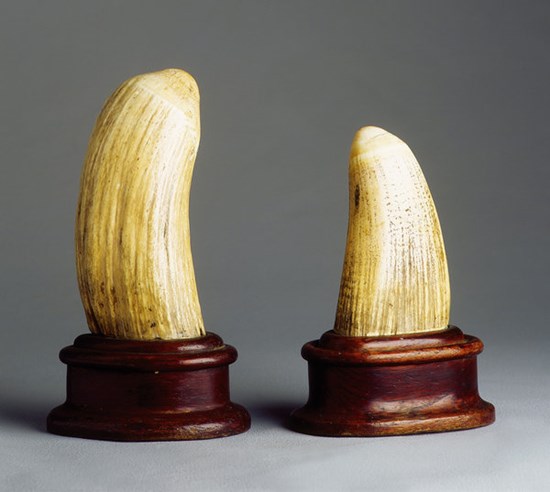