A rare collection of Amazonian feather adornments of exceptional colour and condition from the Urubu Kaapor tribe, Brazil

Caption Literature
A rare collection of Amazonian feather adorments of exceptional colour and condition from the Urubu Kaapor tribe, Brazil
19th Century
A. a man's ceremonial dance crown 'akangatar' with cotton danglerswith attached humming bird feathers, made of yellow oropendola feathers. Urubu Kaapor tribe. Used during name giving ceremonies.
size: 35 cm high 33 cm wide - 14 ins high 13 ins wide
B. a man's harpy eagle bone and scarlet macaw plume necklace. 'awa-tukaniwar'. urubu Kaapor tribe. used during a name giving ceremony
size: 48 cm high 30.5 cm wide - 19 ins high 12 ins wide
C. a Urubu Kaapor womens necklace 'tukaniwar' made of humming bird breast feathers, shellbeads and red Toucan feathers
size: 63.5 cm long - 25 ins long
D. a toucan feather fringed arm band 'lapu-ruwai-diwa' Urubu Kaapor tribe. These can be worn by both men and women
size: 15 cm high 28 cm wide - 6 ins high 11 ins wide
Since the first contact between Europeans and the New World featherworks have been the most prized of all Amazonian artistry. Brazil was called the 'land of parrots' in the early 1500's and Christopher Columbus first brought parrots back to Europe in 1493.
Amazonian featherwork was collected in all major European cabinets of curiosities, and its decorative use has been a strong influence in European fashions since the 17th century. Feathers are attributed with supernatural powers by many of the Amazonian tribes and their use in headdresses indicates the age, status and ethnic identity of the wearer.The Urubu Kaapor are descendants of the Tupi-Namba of coastal Brazil, shown in a 16th century woodcut dancing in feather diadems ( Andre Thevet, 1557 ). they were mostly destroyed by the combined effects of European diseases, missionization and the slave trade. However, the Urubu Kaapor preserved the feather working techniques of the coastal Tupi from pre-conquest times. Paticular types of ornaments were restricted to each of the sexes and featherwork was only worn on important or ceremonial occasions.
Parrots, toucans and Macaws are all kept as pets and single feathers are often plucked from them, but grom back even more brightly coloured than before.
It is ironic that what made the Amazonian Indian appear cultured to himself; his plethora of feathered and natural adornmanets and thus his lack of what the West calls 'proper clothing', was precisely what made him look savage to his European oppressor.

A rare collection of Amazonian feather adornments of exceptional colour and condition from the Urubu Kaapor tribe, Brazil 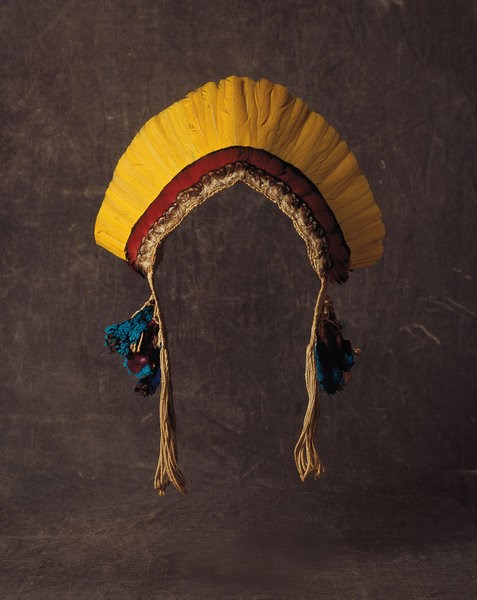 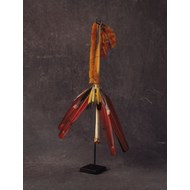 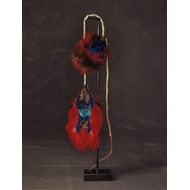 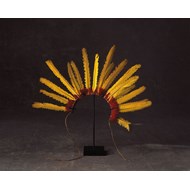