Caption Literature
A Indian starred Tortoise Shell ( Geochelone elegans ) with European engraved silver and hinged mounts
17th Century
Size : 12 cm long x 8 cm wide x 6.5 cm high
4¾ ins long x 3¼ ins wide x 2½ ins
Before the advent of the Grand Tour in the 18th century, travel was restricted to those in the service of the Navy, to immigrants who would never return, to those merchants who were willing to risk all to find exotic merchandise, to those few explorers who found strange lands, and to those wealthy and powerful few who could prevail upon local dignitaries to put them up in relative luxury.
This Indian starred tortoise shell would have found a ready market in the Europe of the time where such things were unseen bizarre rarities that spoke of far lands, of spices, silks and jewels, and untold other singular and mysterious Eastern luxuries. 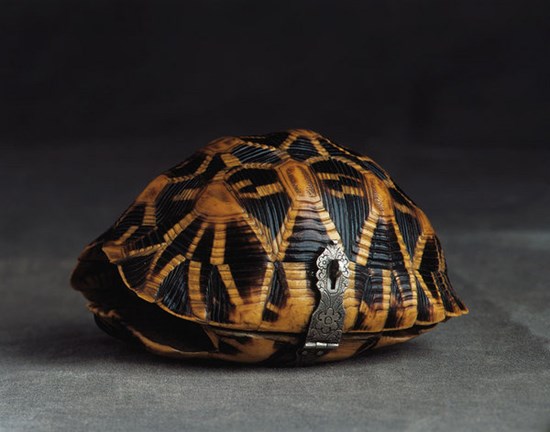