Caption Literature
A Punuk, Bering Sea Eskimo carved walrus ivory handle in the form of a polar beaar
Circa 500 AD to 1200 AD
Size : 9 cm long x 4 cm high
3½ ins long x 1½ ins high
The coasts and islands of the Bering Strait which divides the Siberian and Alaskan mainlands, has supported a series of sophisticated Eskimo cultures from the 4th century BC to the 13th century AD. The ancient peoples subsisted mainly on sea mammals such as walrus and seal which migrated through the Strait with the seasons. This stable food source enabled them to develop a complex religion and a unique artistic style. Their walrus ivory carvings, like this bear handle, have survived due to the preservative effect of the perma frost in which they become lost or buried. Eskimo carvings are acknowledged to be amoung the finest art ever produced by hunting peoples. 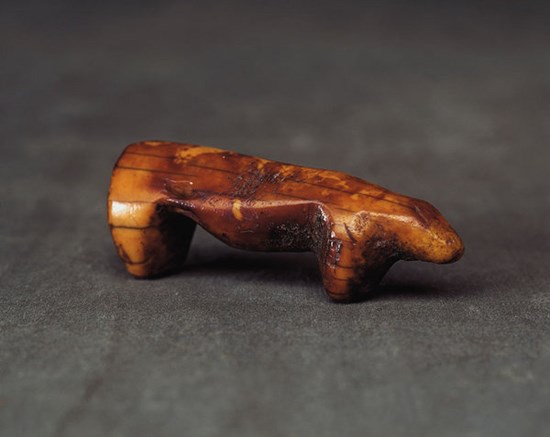