Caption Literature
A Fine and complete Fossil 'Arctica' Shell
Cretaceous period 150-100 million years old
Size : 13cm across - 5 inches across
Known as the Iceland Cockle the fossil distribution of this shell is an indication of cold water conditions. the numerous growth lines on this specimen shows its great age before fosssilization.
Hippocrates studied the first fossil to be recorded in history. Aristotle (384-322 BC) was amoung the Greeks, and later the romans and Arabs, who collected and wondered over fossils.
In the 15th century Leonardo Da Vinci came across numerous fossil deposits whilst supervising the work on a canal in northern Italy. In later life he wrote many notes on these fossils, laying the foundations for the birth of fossil collecting as a science.
The first cabinet of fossils was put together by Greorgius Agricola (1494-1555) who coined the term 'fossil', although he used this term for everything he dug out of the earth. It took another 300 years for the word to be restricted to mean the remains of prehistoric animals and plants found in rocks and sediments. 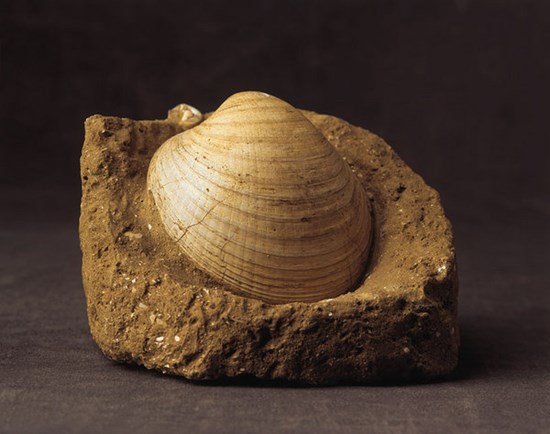