Caption Literature
A Rare Mic Mac Canadian Indian Chair Back , Nova Scotia or New Brunswick .
Birch bark , wood and porcupine quill , papier machí¨ and cane
Mid 19 th century
Size : 107 cm high – 42 ins high
By the turn of the 19 th century several tribes from the Canadian maritime provinces had developed a marketable art for the growing Euro-Canadian population in Quebec city and Montreal and for visitors to Nova Scotia and New Brunswick . The Mic Mac developed one of the most picturesque post contact craft specialities using dyed porcupine quill on birch bark . Both seats and chair backs were often set into frames made by Canadian cabinetmakers.This example is of decorated and gilded papier machí¨ .
It is rare to find chairs where the quill work has survived . The dyes used on this example were vegetal , and the design of classic geometric motifs is a balance between the simpler , earlier quillwork and the more garish ones made later in the 19 th century . 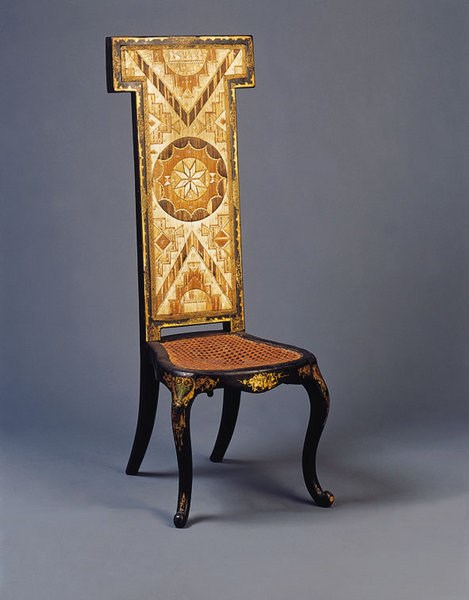