Caption Literature
A rare Huron, Lorette, Great Lakes region deer hide knife sheath. Decorated black stroud border in coloured moose hair in typical floral designs. Red stroud borders with tin cone and dyed hair tassles with glass beads
Circa 1800-1830
Size : 28.5 cm long x 7 cm wide
11¼ ins long x 2¾ ins wide
By 1800 the Indians of the Great Lakes region had been engaged in trade with Europeans for over 200 years. In the 17th century, French Ursuline nuns came to the Canadian missions and brought with them the European tradition of silk floss embroidery which they taught to the Huron, Iroquois and other native girls. before long, the nuns began using dyed moose hair long used by the Indians in place of the expensive French silk. Native embroiderers were likewise influenced by the nuns floral designs, derived from French Renaissance embroidery patterns, and the resulting objects produced by this hybrid aesthetic became the basis of a lucrative cottage industry in the late 18th and early 19th centuries, which provided an important source of income for the Huron and other Great Lakes tribes.
By the 1820's British made Sheffield knives were in common use and this sheath would have been made to accommodate a steel trade knife worn on a belt. 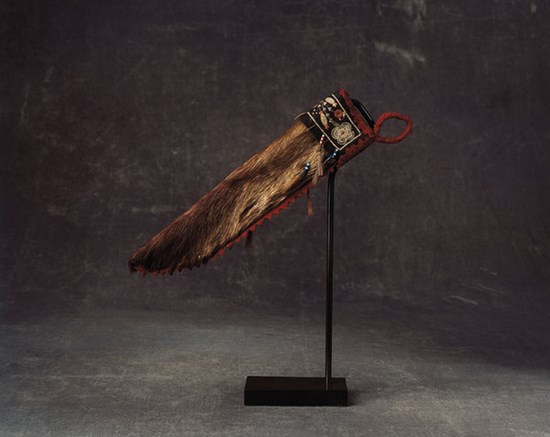