Caption Literature
A Celtic carved Fossil Limestone Head of a Deity
Late Iron Age
2nd Century BC - 1st Century BC
Size : 13 cm high x 9 cm wide x 11.5 cm deep
5 ins high x 3½ ins wide x 4½ ins deep
'...The images of gods, grim and rude, were uncouth blocks, formed of felled tree trunks ... their mere antiquity and the ghastly hue of the rotten timber struck terror ... the people never resorted thither to worship at close quarters, but left the place to the Gods.'
Lucan, a Roman peot writingabout a sacred grove destroyed by Caesar in Gaul in his poem 'Pharsalia'.
Ritual is of the greatest importance to the study of Celtic art and most of the objects that have been found have been buried or deposited in accordance with some ritual. This head is of typical Celtic form with a menacing and ferocious stare emanating from crudely carved socketless eyes.
It was said by the historian Rodney Legg, that this head is that of one of the 'Dumnonii', an ancient Celtic tribe, and that such heads were on display outside public temples throughout the Iron Age.
The Roman Diodorus Sirculus, remarked that the Celts had a great reverence for the power of the head. They embalmed distinguished captured enemies' heads in cedar oil and preserved them to display with pride to strangers. Thus for a Celt to own and display an important head was to retain and control the power of the dead person, which was the inheritance of the lineage. Perhaps these stone heads performed a similar function. 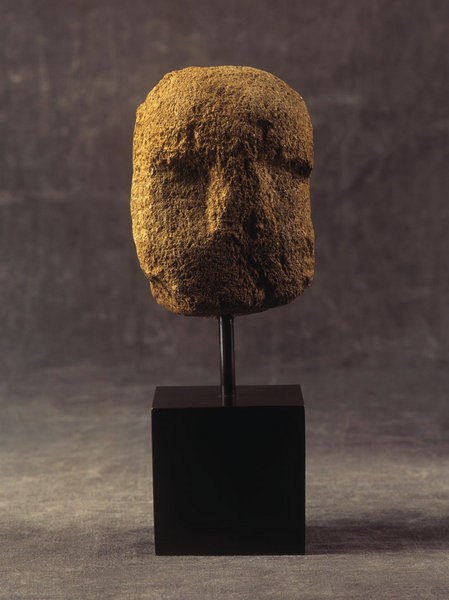