Caption Literature
An Austral Islands Ceremonial Paddle carved from ‘Tamau’ wood covered with
incised geometric designs, the flaring circular terminal with seven stylised human
figures
Fine old dark and shiny patina
Early 19th Century
Size : 98 cm long – 38½ ins long
Anderson on Cook's 3rd voyage ( Beaglehole 1967 II : 970 ) observed that the canoes of 'Tupua'I' were 'managed with small paddles whose blades were nearly round'. However, in 1891 Stolpe notes that the decorated paddles are too frail for practical use and concludes that they must have historically had a ceremonial purpose possibly in dances. Despite the demand for these paddles by early collectors of exotic curiosities little information can be found as to their original use.
By the end of the 19th century the paddles were made often with longer handles and larger blades, in response to a growing demand from passing whaling ships and voyagers, but as evidenced by Anderson, the Austral Islands paddle's general form and decoration is traditional, and was not solely a response to a ready tourist market. 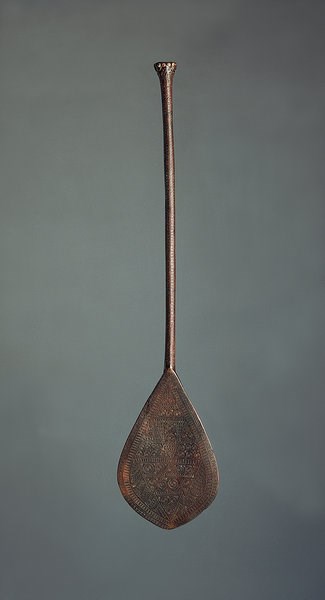 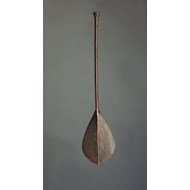