A Baule, Ivory Coast Ceremonial Sculpture of a leopard with its young

Caption Literature
A Baule, Ivory Coast Ceremonial Sculpture of a leopard with its young

The leopard is carefully carved with cross hatching and geometric patterns which create a faceted surface that when covered with gold foil produces an interesting play of light. Used as ceremonial regalia at the courts of both the Akan and Baule rulers the figures represent animals endowed with symbolic meanings or qualities rulers wanted to have associated with their names. This sculpture could possibly have been on the top of the chiefs parasol or on a crown.

The origin of these figures is referred to by Garrard in his essay in 'Gold of Africa'. He describes the use of European batons brought to the gold coast by merchants in the 17th century and given to chiefs and dignitaries. Originally crowned with European silver plated figurines towards the end of the 19th century they began to be decorated with indigenous fine wooden carvings covered in gold leaf.

A Baule, Ivory Coast Ceremonial Sculpture of a leopard with its young 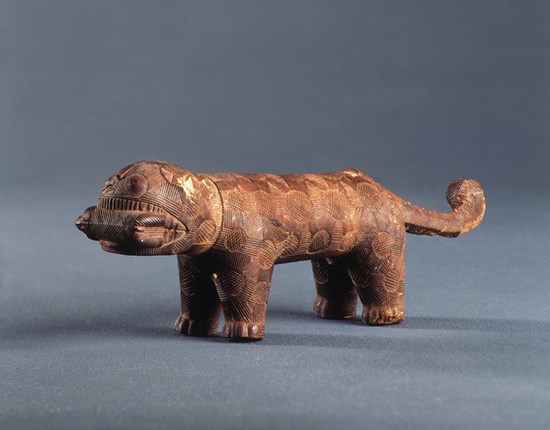