Caption Literature
A Fine Chinese Export Mother of Pearl and Tortoiseshell Box
The lid engraved with a Chinaman and Dutchman smoking long clay pipes before a hairy paw footed table behind which stands a European crowned dignitary. To the side a Chinese merchant with his wares looks on.
The interior of the lid engraved with an old inscription in Dutch
The mother of pearl base engraved with Chinese boats on a river
Qing Dynasty ( 18th Century )
Size : 3.5 cm high, 12 cm wide, 7 cm deep – 1¼ ins high, 4¾ ins wide, 2¾ ins deep
Mother of pearl was a favourite medium for the Chinese export workshops of Canton and Shanghai. Supplies were brought from the Persian Gulf, the Indian coasts and the Islands of the Indian archipelago. At that time it cost $12 - $15 a Picul in its rough state.
The lustre of the surface and the subtlety of the more sophisticated incising made the best work very attractive. It is possible that the origins of the Europeanised scene finely engraved on this box came from a western print as many of the Chinese craftsmen borrowed their inspiration from these readily available outside sources, or were commissioned by merchants to copy them from books and original prints brought from the west. 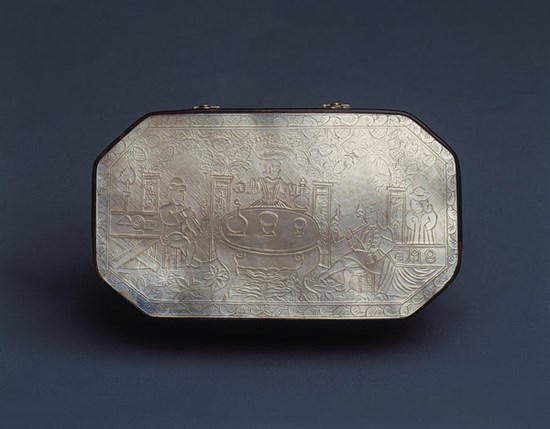 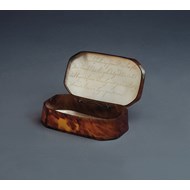