Caption Literature
A Fine Chinese Tortoiseshell, Silver and Horn Opium Pipe
With original pottery bowl
Mid 19th Century
Size : 62 cm long, 9 cm high – 24½ ins long, 3½ ins high
The Chinese had little need for western products and the obvious trade deficit with the west was hard to make up. The only commodity desired by the Chinese was silver. In the late 18th century ginseng, furs and other raw products were shipped into Canton by the Americans, but were not a success. It was opium that was to solve this problem for the British and Americans in the 19th century. The massive expansion of the trade in opium, which the Chinese craved, led directly to the first opium war of 1839 - 1842. The British intervened and Hong Kong and other 'treaty ports' were occupied and forcibly opened up to western trade. The vast Chinese domestic market was now open to British goods, but at a shameful cost to humanity. 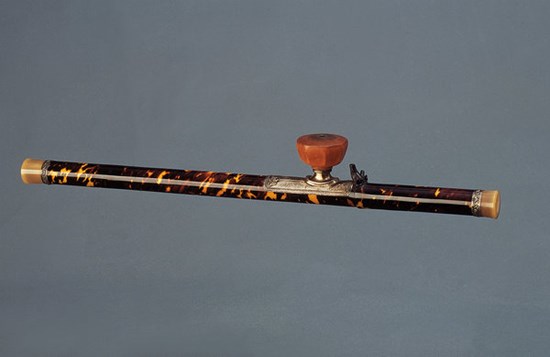