Caption Literature
Two Lower Palaeolithic, Flint Hand Axes
Acheulean Biface, one marked ‘Middle Acheulean 2B’
150-200’000 Years Old
Size : a; 18 cm long – 7 ins long
b; 18 cm long – 7 ins long
Stone age technologists progressively improved the effectiveness of the hand axe. The early types had some serious defects due to the primitive technique used to flake them and this also made them clumsy to use. The Acheulean knapper used two new techniques : the first was of considerable importance as it was later extensively used by more advanced makers of stone tools and consisted of flaking the edge itself in order to build up preliminary striking platforms set at the correct perpendicular angle to the face to be flaked. The second involved the use of a 'soft hammer' or baton of wood, bone or antler to strike the edge of the nodule without crushing it. Both these methods display the beginnings of mans abstract idea of the 'end product'.
Acheulean hand axes reveal characteristic deep rippled scars resulting from hammer-stone percussion together with the long shallow scars characteristic of the baton technique. It has been said that some of the later Acheulean hand axes are the most perfect expression of the core tool concept. 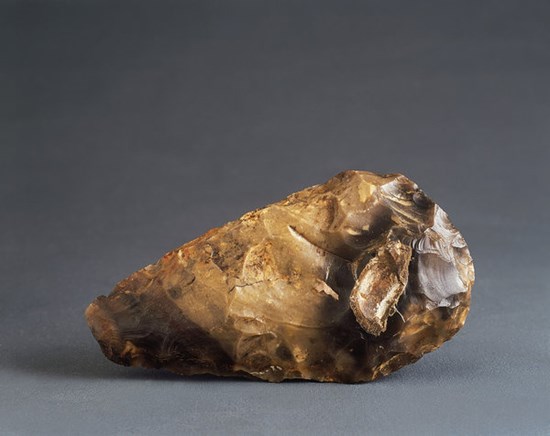 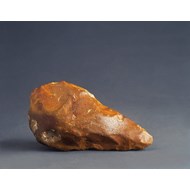